The principles of different methods of refrigeration are: 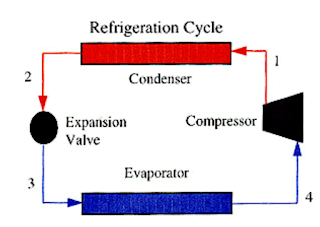 
In this method, the temperature of a space is decreased by the use of ice cubes already produced.
when the ice cubes melt, it takes heat from the space. The loss of heat by space results in lowering down its temperature. This is a more crude method for preserving foods and drinks.


The solid carbon dioxide is called dry ice. It may be pressed into various sizes and shapes and while absorbing the heat, it changes directly from solid to vapour and does not go into a liquid state. It is non-toxic, non-corrosive, and easy to handle. The schematic diagram for the production of solid carbon dioxide.


The carbon dioxide vapours are compressed to high pressure and high-temperature vapours and then condensed to high-pressure liquid CO2 in the condenser. It is made to pass through the expansion valve.

During expansion, the pressure drops below triple point and a mixture of solid and vapour CO2 is received in the snow chamber. The solid CO2  in the form of snow is removed and compressed by mechanical means to form CO2 cakes. The vapour CO2 is mixed with make-up CO2 and once again feed the compressor.

During the change of state from solid to vapour in the application areas, the dry ice absorbs heat equivalent to its latent heat of evaporation. It evaporates at -78*C at standard atmospheric pressure. So this method can produce lower temperatures than ice refrigeration. But the cost of production of solid CO2 is comparatively high due to very high power requirements.

When a liquid evaporates, it absorbs heat from its surroundings, thereby the temperature of the surrounding is decreased. Thermodynamically, evaporative cooling is the adiabatic exchange of heat between air and water spray on a wetted surface. This method of cooling is commonly employed in room coolers.

4. Refrigeration by the expansion of air

In air expansion refrigeration, the cooling effect is produced by expanding air. If the air expansion is an adiabatic expansion, there is no heat transfer taking place.

According to the first law of thermodynamics

[where Q=0(zero) for an adiabatic process]

As the internal energy is reduced, there is a reduction in temperature. Thus the cooling effect is produced by expanding air adiabatically without changing its phase.

5. Refrigeration by throttling of the gas

When air or some gas at high pressure is throttled through a small opening, escapes to the atmosphere after cooling the refrigerated space. This is due to the Joule – Thomson cooling effect.


Simple refrigeration system based on this principle where air or some other gas at high pressure is throttled through an orifice into a refrigerated space. The temperature of the gas falls while passing through the orifice and then escapes to the atmosphere after cooling the refrigeration space. The amount of temperature drop by this method depends upon:

The use of liquid nitrogen and liquid CO2 for cooling applications is rapidly increasing. When the liquid gas evaporates it lowers the temperature of the space. The gas after taking the heat of evaporation is released into the atmosphere. The method of refrigeration is becoming popular in cooling vehicles carrying perishable items. A vehicle cooled by the spray of liquid nitrogen.

The basic principle of this refrigeration is the Peltier effect.
Peltier effect
The cooling is produced at one junction of two dissimilar metals if a direct current is passed through them. Simultaneously heat is produced at the other junction. This phenomenon is called the Peltier effect.
Thermoelectric cooling requires none of the conventional equipment used in a vapour compression system. There is one compressor, evaporator, condenser or refrigerant. The unit is more silent, compact and requires little service.
A simple refrigerator working on a thermo-electric system. When a direct current (D.C) is passed, the junction inside the refrigerator becomes cold and the junction outside the refrigerator becomes is warmer. By reversing the flow of current through the system, the same device can be used for heating the space.

In this type, vapours like ammonia, CO2, SO2, freon etc. are used as working agents called refrigerators. They condense or evaporate within the working range of temperatures and pressures.
When the working agent evaporates, they absorb the heat from the refrigerated space, which is to be cooled. Here the working agents undergo a change of state and heat changes are in the form of latent heat.
This is further classified as follows, based on the manner in which the external heat is added to the vapourised working agent.