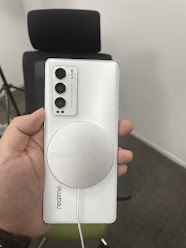 Realme announced Apple’s MagDart technology for MagSafe earlier this month. Requires up to 50W wireless charging. One of the leaked images shows a prototype with a MagDart power supply on the back, and two show a phone with a 15W MagDart drive charger.

Realme unveiled the Realme Flash concept phone earlier this month, showcasing the charging capabilities of its MagDart accessory. However, the company did not comment on whether its proprietary charging technology will be available in commercial devices. To preserve the leaked images, the RealmeMagDart benchmark appears to have been tested with the Realme GT Master Edition.

The Realme GT Master Edition was announced alongside the Realme GT Explorer Master Edition in July, but there were no official details at launch that would lead to the conclusion that the phone will support fast charging technology.