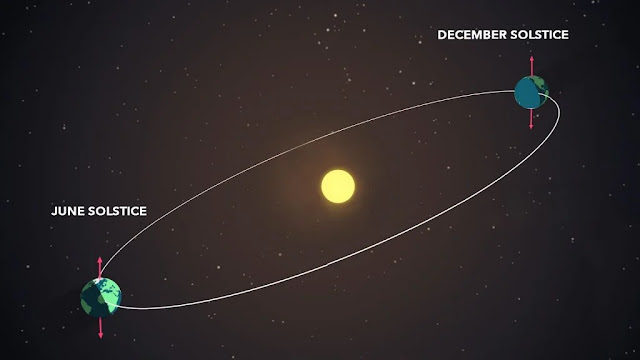 Today is the northern #SummerSolstice, marking a new season as well as the longest day in the northern hemisphere. While it’s a time to enjoy the warmth & light, it also signifies an astronomical event caused by the tilt of Earth’s axis. 🌍☀️ Read more: https://t.co/Wt5BhAKAq1 pic.twitter.com/wsuKWdXr03

In these events, the earth reaches a point whose inclination forms the greatest angle to its orbital plane. Therefore, one hemisphere receives more sunlight than the other. On Monday, on the occasion of the summer solstice, NASA shared an image showing the position of the earth relative to the axis of the sun during these two events. The axis of the earth is an imaginary pole, running through the center of our planet from “top” to “bottom”.

The earth rotates around this pole, creating a day and night cycle, but the axis of the earth is always inclined (23.5 degrees relative to the sun-earth line). NASA said in a blog post that because of this tilt and the planet’s orbit around the sun, we have seasons.

During the summer solstice, the North Pole tilts more directly toward the sun than at any other time of the year, while the South Pole is far away from the sun, which causes sunlight to fall for longer in some places (more than 12 hours) in the northern hemisphere, and beyond the equator. There are even fewer places in the south.