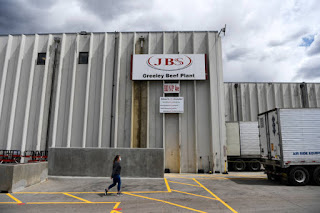 The company said in a statement on Wednesday that the American subsidiary of Brazilian meat processor JBS paid the equivalent of 11 million U.S. dollars (approximately 80 million rupees) to ransomware extortionists to prevent further damage by hackers. “JBS USA confirmed today that it paid a ransom equivalent to 11 million U.S. dollars (approximately 80 million rupees) in response to a criminal attack on its business,” the company said. U.S. media reported that the payment was in Bitcoin.

At 11 AM US Standard Time on June 10, the price of Bitcoin in India was 2.68 million rupees. The statement said: “At the time of payment, the vast majority of the company’s facilities were operating,” and added that the company has continued to pay, “to mitigate any unforeseen issues related to the attack and ensure that they will not be leaked Data.”

President Joe Biden said last week that the White House has linked Russia to the incident. “JBS USA has been in communication with government officials throughout the incident. “The company said in a statement. “The third-party forensics investigation is still in progress and a final decision has not yet been made. The results of the preliminary investigation confirmed that the company, customers, or employees’ data were not compromised.

“Andre Nogueira, chief executive officer of JBS America, said: “This is a very difficult decision for our company and for me personally.” However, we believe that this decision must be made to avoid any potential risks to our customers. The month forced the temporary closure of the huge Colonial pipeline in the eastern United States, and the Colonial Pipeline paid Russian ransomware blackmailer Darkside 4.4 million U.S. dollars (about 320 million rupees), and the U.S.

Department of Justice was able to recover more than half of the payments through tracking bitcoin because It obtained this amount through multiple anonymous transfers and eventually seized it from the cryptocurrency wallet. JBS is an expanding meat supplier with operations in the United States, Australia, Canada, Europe, Mexico, New Zealand, and the United Kingdom.