Samsung Wednesday launched a device called the Eyelike fundus camera, which aims to transform older Galaxy smartphones into ophthalmic devices that help diagnose eye diseases. This new device was developed under the “Galaxy Upcycling” program, which aims to reuse old Galaxy smartphones for medical diagnostic cameras. Samsung also expanded its “Galaxy Upcycling” program to India, Vietnam, Morocco, and Papua New Guinea. The program launched in South Korea in 2017 and is designed to use old mobile phones. Handheld fundus cameras are connected to lens accessories, and artificial intelligence (AI) algorithms are used in older Samsung Galaxy smartphones to analyze and diagnose images of eye diseases. It is connected to an application to capture patient data and propose treatment plans. 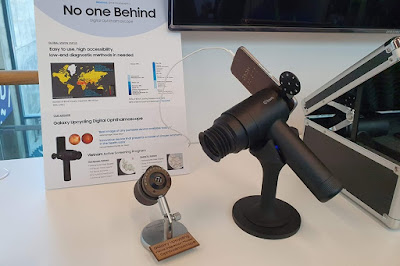 Because the fundus camera uses existing Galaxy smartphones as its brain to evaluate patients, it is touted to help them diagnose and the price is only part of the commercial instruments. Small part. Fundus cameras can screen patients for diseases that can cause blindness, including diabetic retinopathy, glaucoma, and age-related macular degeneration. The company has partnered with the International Agency for the Prevention of Blindness (IAPB) and the Yonsei University Health System (YUHS) in South Korea to develop the device under its Galaxy Upcycling program.

In addition, the Samsung India-Bangalore R&D Center (SRI-B) contributed to the construction of the fundus camera software. “The combination of multiple optical technologies and artificial intelligence, coupled with the camera performance of Galaxy smartphones, creates an affordable medical device that is as powerful as a fundus camera used by medical professionals. Dr. Sangchul Yoon from Yonsei University Medical System In a prepared statement He said that this not only solves health problems but also intensifies attention to the environment.

The Eyelike fundus camera was first showcased at the 2019 Samsung Developer Conference. Its prototype has been in Vietnam since 2018. The device is said to have benefited more than 19,000 residents. In 2019, Samsung provided 90 portable ophthalmoscopes to healthcare professionals in remote areas of the country. In addition to Vietnam, Samsung also expanded the Galaxy Upcycling program to India, Morocco, and Papua New Guinea.

“We believe that technology can enrich people’s lives and help us build a more just and sustainable future for all. Samsung is committed to supporting sustainability in 2030. Part of the development agenda The company also brought the feature of using Galaxy Upcycling at home in January, with the goal of making old phones reusable as connected devices.