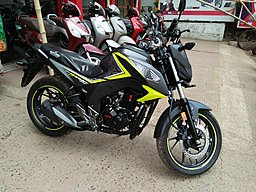 The Japanese two-wheeler manufacturer seems to suggest that there’s something big planned for the Honda CB Hornet. Could this possibly be a 200cc model? A closer look at Honda’s Indian portfolio sure points in that direction. Honda currently competes in the 150-160cc, 250cc and 300cc entry-level performance segment, leaving space for a 200cc model. In a related development, Honda India also filed a patent for the China-specific CBF190R, which may go on to be a larger Hornet.

CB Hornet 160R was powered by a 162.71cc single-cylinder air-cooled carburetted engine. We expect Honda to use a tweaked version of the BS6 Unicorn’s engine. In the Unicorn, the motor makes 12.9PS at 7500rpm and 14Nm at 5500rpm. On the other hand, the Hornet BS4 engine produced 15.9PS at 8500rpm and 14.78Nm at 6500rpm. The engine is coupled to a 5-speed gearbox and returns a company claimed fuel efficiency of 42.85kmpl. The BS6-compliant model, expect Honda to use the same 5-speed transmission as the BS4 version. On the Honda, Hornet would find a telescopic fork and a preload-adjustable mono-shock. Braking hardware on the standard model consists of a front disc and rear drum brake setup while on the deluxe you would get disc brakes at both ends. Single-channel ABS as standard across the trims. To remain unchanged in the BS6 bike as well.

The new motorcycle has been designed to target youngsters and adopt an aggressive design philosophy. The trapezoidal-shaped headlamp has been carried forward from the Unicorn 160 but gets LED pilot lamps. It seems that Honda designers have paid special attention to the fuel tank as the chiseled lines and beefy tank shrouds adding a dose of muscle to the overall styling. The rear section of the CB Hornet 160R features an X-shaped LED taillight that makes the tail section look distinctive. The new Honda motorcycle also features multi-spoke alloy wheels, split seats, and an all-digital console which is a straight lift from the Honda Unicorn 160. Switchgear quality is decent but the lack of engine kill switch is disappointing. Overall the Honda CB Hornet 160R is a striking looking motorcycle and design influences from the Honda CX-01 concept that was showcased at the 2014 Auto Expo can be seen.
Prices for the two trims were set at Rs 93,042 and Rs 95,542 Estimated.
The Hornet 160 competes with the TVS Apache RTR 160 4V, Suzuki Gixxer, Bajaj Pulsar NS160, and the upcoming Hero Xtreme 160R.