Skip to content
EMIX Community
Twitter is testing a new feature that allows users to limit who can reply to their tweets, the social media giant announced on Wednesday. The new feature is essentially a new reply permission setting that will enable users to decide who can respond to their tweets. Currently, when a user publishes a tweet on the platform, anyone regardless they are following the user or not can respond to the aforementioned tweet. 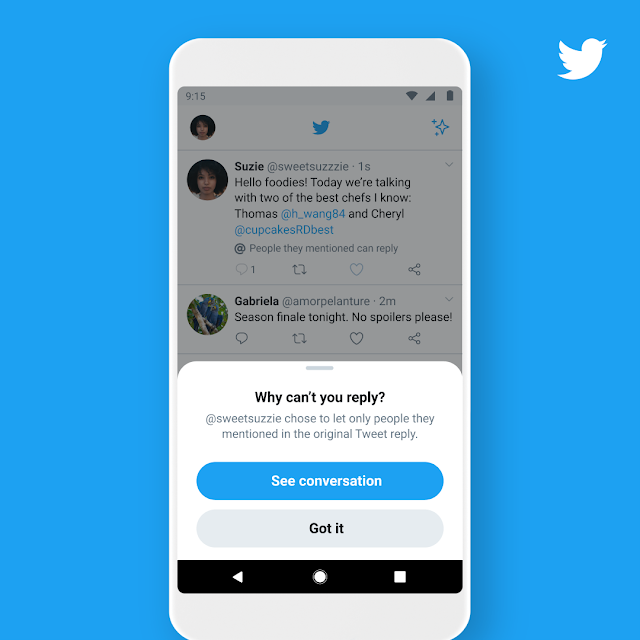 The new development was announced by Twitter in a video demo published on the platform. In the demo, Twitter revealed that it is adding new permission setting right below the tweet compose window that will allow users to select who can reply to that tweet – Everyone, People You Follow, and Only People You Mention. This will be very useful to users of the platform when they do want their tweets to seen by the world but don’t want unnecessary replies. For completely private conversations, Twitter already offers Direct Message functionality, and for a filtered experience, there are protected tweets.
As the option names suggest, only those users that the author of the tweet has selected will be able to respond to the tweet. However, other users who aren’t “invited” to reply to the tweet, can still view and like the post.
The new feature is currently available to limited users globally as it is still being tested. There is no word on its wider rollout, however, if everything goes well, it should not take longer than a few weeks.
Twitter earlier this year had also suggested the launch of a reply permission setting in the future. “We want to help people feel safe participating in the conversation on Twitter by giving them more control over the conversations they start. We’ll be experimenting with different options for who can reply to Tweets in early 2020,” the company had then said.
Currently, Twitter allows users to make their account private to limit replies from other users who aren’t following them. Twitter’s biggest rival, Facebook offers a similar feature where users can limit a post to who all can see it.