What is BS Engine?

Bharat stage emission (BS) are emission standards instituted by the Government of India to regulate the output of air pollutants from compression ignition engines and Spark-ignition engines equipment, including motor vehicles. … The standards, based on European regulations were first introduced in 2000.

1991- Mass Emission Norms
They came into an effort for petrol vehicles in 1991 and diesel vehicles in 1992.
1992- Revision of Mass Emission Norms
Fitment of catalytic converters was made mandatory in vehicles sold in meters.
2000- BS-1 Norms
India adopts the new norms in line with international Euro-1 emission norms.
2005- BS-2 Norms
These first came into the effort in three meters followed by its application on a nationwide basis.
2010- BS-3 Norms
These norms were first brought into the effort in 11 Cities.
2017- BS-4 Norms
The sulfur contents in the fuels were brought down by 100 ppm and 300 ppm in petrol and diesel respectively.
2020- BS-6 Norms
It is said that NOx Emission will be brought down by 68% in diesel and 25% in petrol cars. 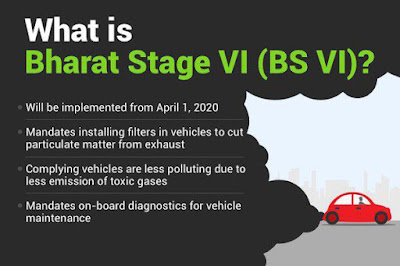 What are BSI, BSII, BSIII, BSIV and BSVI Emission Norms?

These are emission standards set by the governing body Bharat Safety Emission Standard (BSEB) to regulate the output of pollutants from vehicles plying on the road. The Central Pollution Control Board, under the Ministry of Environment and Forest and Climate Change, sets the permissible pollution levels and timeline to implement the same by vehicle manufacturers.